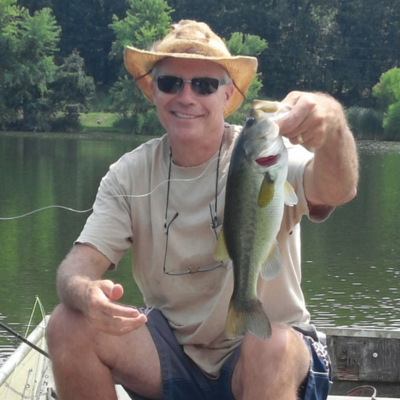 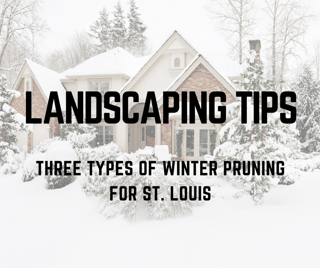 Most people only think of pruning their shrubs when they see them looking overgrown in early to mid-summer after their full spring flush.  This is because they’re looking especially shaggy. Some may even appear to be outgrowing their location!

Instead of making drastic cuts in the peak of the season or worse, removing the tree or shrub, consider pruning in the winter time. This is the best time to accomplish several types of pruning.

There are three types including: Reduction, Corrective, and Rejuvenation pruning.

This is the easiest type of pruning to view at a glance, and oftentimes our St. Louis landscaping clients will bring this type of winter trimming and pruning to our attention in the middle of the season. 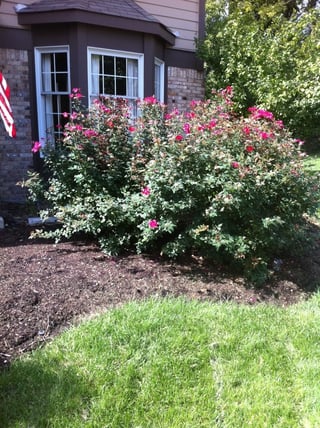 In reduction pruning, the goal is to reduce the overall size of the targeted plant.

For the sake of this discussion, let’s keep this focused on shrubs. If you have your shrubs trimmed by a landscape company repeatedly with shears, then your shrubs may develop some “bunchy” growth at their tops where the pruned stem sends out new growth every year.

By selecting the larger stems and cutting them below these splits, we can reduce a lot of bulk from the perimeter of the shrub, allowing more light to the interior of the shrub to trigger new branches to arise from the base of the plant. By cutting back a third to a fourth of the largest diameter branches every year or two, the size can be kept in check.

The larger the stem, the farther back it should be cut. This type of pruning works well for Panicle Hydrangeas, Viburnums, Weigela, Bayberry, Rose of Sharon, and shrub roses as you see in the photo.

As a St. Louis homeowner, you will notice when a tree or shrub needs corrective trimming by locating the branches and how they flow outwards from the plant. This is best identified in winter time when there is less foliage to block your view. 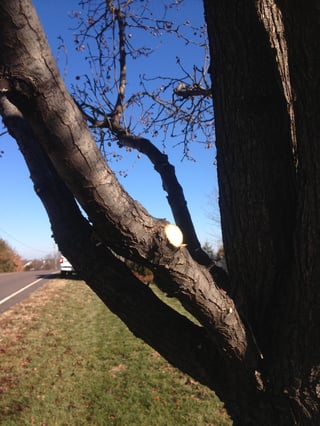 The purpose of corrective pruning is to remove any crossing or rubbing branches, codominant leaders, or branches with too narrow of a crotch angle.

To correct this, one of the crossing branches should be removed, it’s helpful to imagine the section of each branch being gone, to decide which one should go. It is far easier to visibly identify crossing or rubbing branched in the winter time when leaves are not present.

A codominant leader is when the leader (the tallest tip) of a young tree has two matching shoots, instead of a single strong dominate shoot. If they are both left to grow, they will form a weak crotch where they meet, which can cause the tree to split in half!

If the two leaders have gotten rather large, it’s sometimes advisable to cut the weaker of the two back to one of the first or second forks beyond the split, to avoid having a large open wound on the tree.

When a branch angle is too narrow (less than 40 degrees), it has a good chance of breaking as it grows larger and gets heavier. These types of branches should be removed early. This corrective pruning can be done on any type of woody plant, just keep in mind that the sooner it is done, the better.

Rejuvenation pruning is when a vigorous type of shrub has been allowed to “go natural” for a long time, and is completely out of shape.  The shrub may now have issues with vines or other woody weeds in them that need removing. 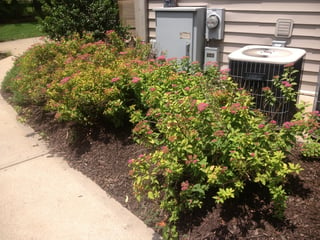 Rejuvenation pruning will cut back the whole shrub to the ground to make the job easier. Then, the following year, after the shrub resumes normal growth, normal pruning can be resumed.

Pruning your shrubs in the winter is easier because you can see the framework of the plant without leaves and the removed braches are not near as heavy. In addition, the frozen ground allows for minimal damage to surround plantings or turf, especially when heavy equipment is needed.

So take advantage of a nice day during the winter and do some pruning. You’ll love the results after leaf-out and your shrubs will look wonderful.

If you’re not that confident with pruning, contact our professionals at Dowco to get signed up for a winter trimming and pruning for your St. Louis landscaping today!

Designed with 💜 by Keldo Digital